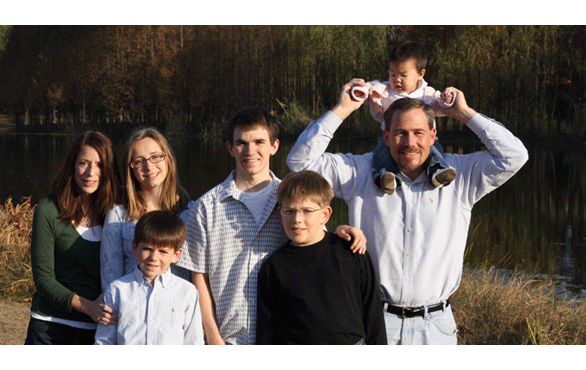 We had been on the list to adopt a “healthy” child from China for about 18 months, before we knew we were moving to Shanghai for my husband’s job. We had 2 biological children and then my sister passed away, so we also had her 2 children as well.

I had heard about Baobei foundation through Ann Kedl, whose daughter was in the same school as my daughter. They both played volleyball.

I was thrilled that there was an organization out there to help care for these abandoned children.  They work so hard to provide them with the Healthcare they need and find families for them to stay with while they are healing instead of getting sent back to an orphanage.

Initially the idea of special needs frightened me, but then I learned that “special needs” is a broad term and not all the conditions were that difficult to manage. When we met our future daughter at the hospital we knew that was the path we were meant to take.

Originally her file was supposed to go to another adoption agency. They had a special agreement with the orphanage she was assigned to, in the US. My agency tried to get them to transfer our file so it could be matched with Jessica. Even though they refused to do that, somehow her file got sent to my agency and they matched us.

With my two children and my sister’s two children, it almost felt like two different families. When Jessica came, she just seemed to bond us all together. The kids stopped calling each other cousins, and just called each other brother and sister. It was quite magical.

I desire all my five kiddos to be happy, healthy and love life!

Ian Olson and his friend, Sam Brantingham has been invited to speak at the annual global conference of a group called Design For Change in Beijing on the 10th and 11th of December 2016. Below is a quote from Ja Wuttithamrong (Ivy Education Group), in her invitation.

I love Ian’s story and passion. He went through DFC’s model of “Feel, Imagine, Do and Share” without probably ever having heard of DFC! But basically-he began with FEEL: He was upset by what he heard that there were no parks in Liberia. Yes, it may have been a figure of speech-but it was still the truth. His IMAGINE was: “wouldn’t it be great if there were more parks.  So, together with you-he approached other organizations, who refurbished used parks (this part is DO) and gifted the park to a local community. That was the SHARE.

It is the desire of the Olson family to invest in children and see them emerge into mature, sensitive caring adults.